Check Out This Superb Article in Wyoming Living Written by One of Our Parishioners!

You’ll see them every Monday and Wednesday, filing into the parish hall in their white uniforms and their colored belts. Kids and adults, boys and girls. There’s a college professor, an engineer, a musician, a guy who makes gelato. There’s even a priest and an overweight, middle-aged blog post writer. They come to spend an hour or so kicking, punching, and blocking. If you’re strolling by on a warm night, through the open windows you might hear them shout “Kiai!” as they complete an exercise, because the hall at Ascension and Holy Trinity Episcopal church is home to the dojo of the Ohio Valley Karate Club, run by Wyoming’s own Marty Schrager.

“Everybody goes into karate for the wrong reason,” says Schrager, a 5th degree black belt, who started the club in April of 2010 with just a handful of students. “They either want exercise, or they want to kick butt. Those are just by-products. Karate’s not about fighting. It’s about mastering your own body.”

He has a point. This year, three adult club members were awarded black belts—the first of Schrager’s students to achieve that goal. “I originally started because my son had joined the club and it looked like fun,” says Mike Hudepohl, a Wyoming resident and newly minted black belt. “To me, it’s kind of like golf – every time you think you’re getting the hang of it, you discover some new glaring deficiency in your technique.  The challenge is fun, though.”

Since its humble beginning, the OVKC has grown to include about 15 adults and 15 kids, some as young as seven years old. Very few joined hoping to kick butt, or if they did, they kept it secret.

“Parents sign their kids up for a couple of reasons,” Schrager says. “Maybe the kid wants to try it, because karate is intriguing for kids. Maybe they’re hoping to instill a little discipline in their kids. Then the third group is kids who don’t enjoy team sports—they don’t enjoy soccer or football or running.”

That goes for adults as well. “A lot of people come in because they don’t enjoy lifting weights or running. They want an exercise regimen they can enjoy,” Schrager says. “Karate is an art you can spend your entire life trying to perfect.”

A typical training session begins as students “bow in”, to show respect for the dojo and the instructor (the “sensei”). The class takes several minutes to stretch out their muscles. Then the sensei warms up the students by taking them through a series of basic kicks, punches, and blocks, which even the most advanced students must practice.

“The misconception is that I’m going to teach a set of moves, like the five-point palm exploding heart technique,” jokes Schrager in a reference to the martial arts movies he enjoys. “That is the complete opposite of what it is. You learn karate by thousands and thousands of repetitions of movements. It’s an art, like painting—you have to learn the techniques first.”

After the basics, the class may focus on kata, which are prescribed sets of techniques meant to highlight certain styles—say, quick and sharp movements versus strong ones. Each level of training brings new kata to learn, more than twenty in all. Or the lesson may involve kumite (sparring) with students squaring off against one another to apply their training in competition.  Finally, the class “bows out”, after reciting the “dojo kun”, a series of tenets such as “Respect others” and “Refrain from violent behavior.”

Rev. Eric Miller, rector of Ascension and Holy Trinity, joined the club a year ago. “I love the fact that both mind and body have to work together,” he says. “I enjoy running and other exercise activities, but karate is the main activity where my brain and body are both engaged.”

Outside of class, members of the club attend regional or even national training events through the International Shotokan Karate Federation, the organization of which OVKC is a part. In September, the club will play host to such a training session as 70-100 karate students crowd the dojo from all over the Mid-America ISKF to study and learn from the best.  The ISKF also conducts tournaments where students can match their skills with others.

“I once had a student ask when we were going to fight another school,” laughs Schrager. “I had to tell him that we do have tournaments a couple of times a year, but it’s not what you see in the movies.”

Marty Schrager is no stranger to competition, however. He regularly attends the regional and national ISKF tournaments  and is often among the top finishers. His performance has earned him a place on the United States team two years in a row, making him the oldest member of the team. In 2016, he attended the World Shoto Cup tournament in Capetown, South Africa. “That was a pretty cool experience,” he says, although he goes on to elaborate, “It’s nice to get the rewards from it, but competition is not a big part of what we do.” 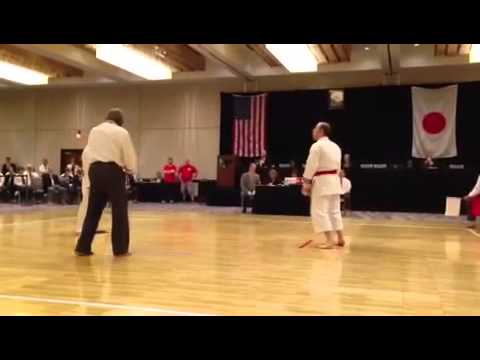 “I think the goal of karate is different for each person, and it evolves over time,” he says. “For me, the goal is two things. There’s mastery of the techniques and getting as close to that as I can.

“Equally important, though, I flat-out enjoy what I’m doing. The journey is the goal.”

Ohio Valley Karate Club offers classes every Monday and Wednesday at Ascension and Holy Trinity Episcopal Church, 334 Burns Avenue. Classes for young and beginning students are from 6:15-7:15 p.m. Adult and advanced students train from 7:30 – 8:45 p.m. For more information, visit the OVKC website at  http://www.ohiovalleykarate.com or email Marty Schrager at sensei@ohiovalleykarate.com. The first class is free.